Astrological news this week: – Astrology readings and writings by Lynn Hayes, horoscope is one of the oldest sciences that are concerned with celestial phenomena, their development, and their physical and chemical characteristics. 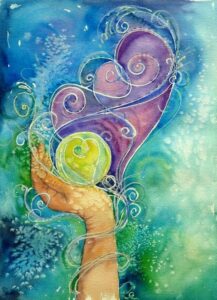 art may be by Reina Cottier

Mars/Uranus/North Node. This week will begin with the climactic conjunction of Mars to Uranus and the North Node, an event which was building last week and peaks on Monday. Mars is fiery action and Uranus is the rebellious departure from the norm, so together they make quite a team. Meanwhile the North Node calls to us from the future, asking that we make the correct choices to lead us down the road to where our destiny awaits. We may feel somewhat scattered and anxious, especially on Monday but also as the week winds down along with the planetary energies, but within that anxiety there are clues to the path towards a more enlightened future.

Mercury enters Virgo August 4. Mercury is quite happy in Virgo, one of his rulership signs, where he can put his analytic skills to work. Over the next few weeks our problem-solving skills will get a nice boost and if there’s any area of ​​your life that needs more organization, this is the time to get out the spreadsheets and notebooks.

Venus is active, harmonizing with Mars, Uranus and Neptune throughout the week. Harmonious Venus aspects help to bring greater personal equanimity and peaceful relations with others so this is a good thing.

Mars Square Saturn. The challenging square from Saturn (rules and order) to Uranus (rebellion and revolution) which was the hallmark of 2021 is mostly finished, but this aspect will tighten through the rest of the summer and early fall. Even though the aspect won’t again be exact, it will be close enough to be felt and transits of Mars and Mercury will activate the square. These could be times of social upheaval, and the square of Mars to Saturn on Sunday is one of those times. This will likely begin to build on Friday, but with the Moon in optimistic Sagittarius that day, and a lovely creative trine from Venus to Neptune helping us to see the best in all situations, I don’t anticipate that this will give us too much trouble.

Heads up for Venus square Pluto next Monday. Venus aspects are fleeting and last only for a day or two, but on Sunday we will begin to see the effects of the challenging opposition from Venus to Pluto. This is a difficult aspect for interpersonal relationships and has the potential to bring up any latent power struggles. The Moon will be in Cancer at that time which opens up the heart for feelings to fly out, so this could be a highly emotional time.