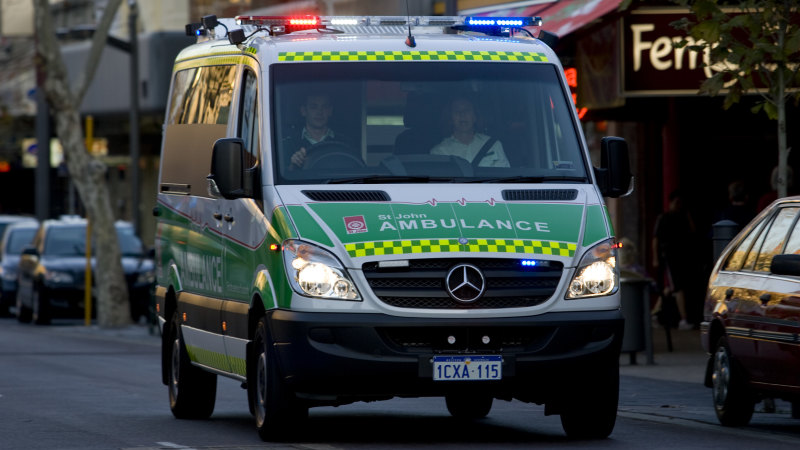 “But the simple fact of the matter is all of our available staff were tied up either at hospitals or on jobs.”

It is here we get into claim and counter-claim, as the buck gets passed.

Fyfe could not give an exact answer on exactly how many crews were unavailable to COVID on Sunday but agreed it was about 20 per cent.

At a press conference, Premier Mark McGowan said he was advised St John’s workforce was 40 per cent short.

McGowan said the government had been “urging” St John to put in place critical worker protocols which would allow close contacts to come back to work.

This only happened on Monday.

“There were 122 hours of [ambulance] rampant in that period [Sunday] because we have a system that is under pressure and stress,” Fyfe said.

McGowan claims there was no ramping at the time at Joondalup hospital, the closest hospital to Wild’s family home.

Fyfe could not say whether St John, knowing it had no ambulances available, should have or did suggest alternative transport options to Wild, like a family member or even a taxi given the circumstances.

“We have to be fair and have the opportunity to have that independent clinical review to truly understand all of the circumstances,” she said.

McGowan said there were protocols which would allow St John to call on skilled DFES firefighters to help backfill in the event of staffing shortages and hinted at frustration that these had not been activated.

“We are investigating what further involvement the government can have in these issues and what further management we can put in place to ensure better performance by our ambulance service.”

With darkly ironic timing, a politically motivated parliamentary inquiry report into the ambulance service is set to be handed down as soon as Thursday.

It is chaired by Pierre Yang, a fast-rising MLC who is aligned to the United Workers Union, which represents ambulance paramedics and wants the service brought into public hands.

That contract is up for renegotiation at the moment but when it was last signed in October 2020, a McGowan government press release hailed a deal that would provide “continuity and confidence”.

“The new agreement will improve transparency and confidence that St John Ambulance is appropriately resourced to continue to deliver a high level of service to the community,” the release said.

That was two months after St John’s medical director Paul Bailey first drew attention to the fact ambulance ramping had quietly crept up, to 1700 hours that’s month, up from the 500 hour “crisis” in 2016 that prompted former Liberal health minister Kim Hames to ( unsuccessfully) “ban” the practice. Since then it routinely breaks 5000 hours a month and there are no easy fixes in sight.

Simply, there are too many ambulances waiting too long to transfer their patients into the care of overstuffed hospitals.

The problem needs to be attacked from both the demand and the supply sides but only recently has the government acknowledged the reality.

WA’s first COVID wave certainly has not helped, but really, it has exposed the razor thin margins in the system at large.

This was the opportunity of WA’s two COVID-free years to prepare, and it was squandered.

Someone in the system, who like nearly everyone in the system I speak to has been watching the slow moving car crash unfold before them in real time, put it this way just last week.

“Ramping and ED overcrowding are the canaries in the coal mine of broader health system. The canary died years ago and we replaced it with a plastic canary. Some dude just walked into the mine and lit a cigarette.”

The Morning Edition newsletter is our guide to the day’s most important and interesting stories, analysis and insights. Sign up here.